The question I get asked every time I catch up with someone since we have returned from our trip is “What was your favourite bit” and it is so indescribably hard to choose a favourite place after two months where I saw and experienced so many amazing cities. I have loved 90% of the places we have been to, and people regret asking once I start thinking out loud about what an amazing place Europe is. But, long story slightly less long, if I had to choose one city that really blew me away, one city that I fell head over heels for, it would be Venice. Maybe it was because I wasn’t expecting to love Venice, after so much hype around this little city located on a lagoon I wasn’t that excited. Italy itself I knew would deliver in terms of food, but in general I kind of thought the highlights of our trip were done.

How wrong I was.

We arrived in Venice after a ridiculously long but beautiful train ride and walked in the burning hot Italian sunshine to our little basic room in a suburb just outside of the city of Venice called Mestre. We were exhausted, and without much excitement for Venice we decided to just use the afternoon to look around Mestre and do a much needed laundromat run, whilst drowning ourselves in ridiculously cheap sparkling water to fend off heat stroke (and to think it wasn’t even the middle of summer). We grabbed dinner at a little “Snack Bar” which turned out to be common throughout Italy and are an amazing, cheap way to grab food and drink in Italy.

This little snack bar kind of became our second home in Mestre, mainly because Venice itself is ridiculously expensive and this place did pizza, pasta and beer (aka everything we needed to survive, at a ridiculously cheap price). Plus the people were friendly and it was always stocked with enthusiastic, noisy, gesturing Italians. The people didn’t speak a word of English, and I was struggling to adjust to speaking Italian but somehow, in Italy not knowing the language wasn’t really an issue. Who knew hands were so great for communicating.

Our second day, after spending a restless night in a relentlessly hot room, we caught a morning bus into Venice itself (after a cappuccino with the locals at our new local). We stepped off the bus and immediately headed in the opposite direction to the main street that our hotel had recommended as an easy way to hit the sights. Best decision ever. Who would choose one large street, crammed with tourists and tourist shops over small walkways winding alongside canals, empty of tourists and with little hidden shops and restaurants full of locals. We got lost within five minutes and that was the best part of the day. Every turn, every little path held a new surprise, from peaceful canals, magnificent churches somehow hidden behind a corner, tiny little pizzerias and gondoliers suddenly appearing around corners.

It was breathtaking. I have never been so quickly taken with a city but there is something so utterly unique and characteristic of Venice that we had smiles on our face the entire time. I was drawn into a little shop, almost empty apart from the owner and stocked from floor to ceiling of handmade venetian masks. We ooohed and ahhed at the beautiful masks and the owner who was so wonderfully Italian couldn’t resist telling us all about Venice’s Carnivale where the city packs full of masked Venetians. He donned a cape and a mask and then dressed me up to so that Edd could snap some photos. It would have been creepy if it was anywhere else, but in Italy this enthusiastic attitude just made so much sense. He wasn’t trying to push a sale (my immediate fear) but was so incredibly proud of his city, his traditions and his talent that he wanted to tell us all about it. He was just one countless Italians who made them one of my favourite nationalities to interact with.

We stopped in at the Scuolo Grande di San Rocco where we admired the huge number of works by Tintoretto, concentrated in one beautiful building. They had basic wooden mirrors to walk around and see every artwork on the ceiling without hurting your neck, a detail that was kind of genius. It was quiet, peaceful and full of incredibly religious imagery but it held nothing to the city itself so it wasn’t long before we were back on the streets of Venice, exploring (read- getting lost again).

We ate deliciously hot calzone, stuffed full of fresh tomato, basil and mozzarella whilst sitting canal side as the gondoliers went past, occasionally with a song proudly belted out. We made our way through winding streets in the general direction of Piazza San Marco, but we were drunk on Venice’s charm and a short walk took much longer as  we lapped up the views that only Venice can offer, couples celebrating a surprise engagement over a glass of prosecco, Gondoliers waiting for eager explorers, melting gelato in the hand of every second tourist and those beautiful emerald canals that play host to it all. With no cars, bikes or scooters everyone is on foot, which is great after a month of nearly being run over countless times.

We eventually met up with the many tourists at Piazza San Marco, staying long enough to gaze adoringly at the pink marble of the gothic Ducale palace and laugh along with many others at the pigeons who were more than a little daring. It was busy but the piazza is so grand and spacious that it doesn’t feel crowded until you try to leave, back into the narrow streets. We attempted to follow the Lonely Planet walking tour, and kind of succeeded, catching the main sights such as the Rialto bridge and the ancient seafood market. But no where did we enjoy Venice more than when we took a wrong turn, ended up in some little courtyard and decided to break for either gelato, a spritz (venetian cocktail/wine mixer) or both.

At the beginning of this trip, 8 hours of walking felt like murder. In Venice I could have kept walking forever (well I would like to think so) but eventually we took a rest and sat beside the canal with half a bottle of Prosecco, the Venetian answer to champagne. I tried and failed to blog, too distracted by the beauty of this unique and wonderful city, and its local characters who come along as part of the deal.

I have never fallen so hard and fast for a city. With Venice, I was head over heels from the moment I took a wrong turn. 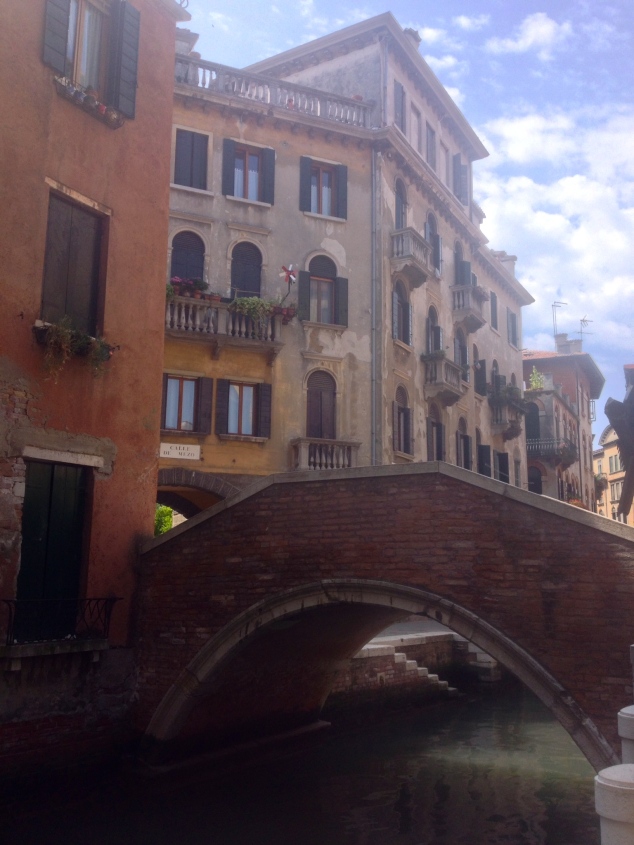 My first photo in Venice. 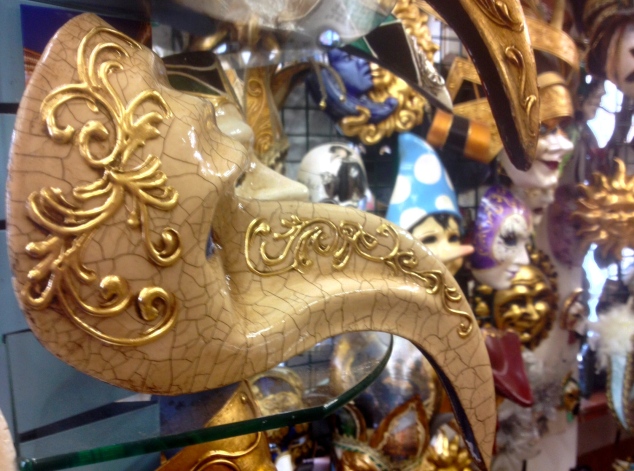 In our new favourite mask shop

I won’t caption all of these…because they will all be the same. Take me back

The Grand Canal, which was a whole other type of beautiful 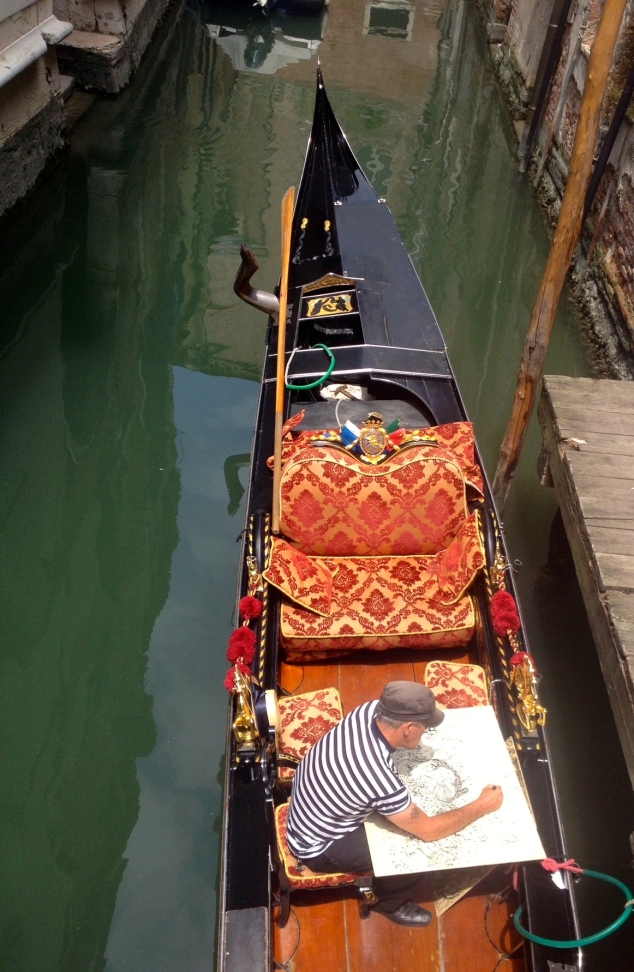 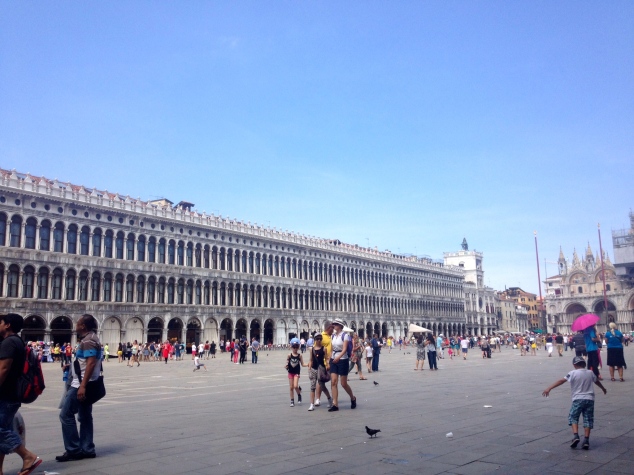 The guy who sang for all of us who watched. It was one of those moments that was so perfect you kind of expected a flaming meteor to come down and kill everyone…just me? Oh. 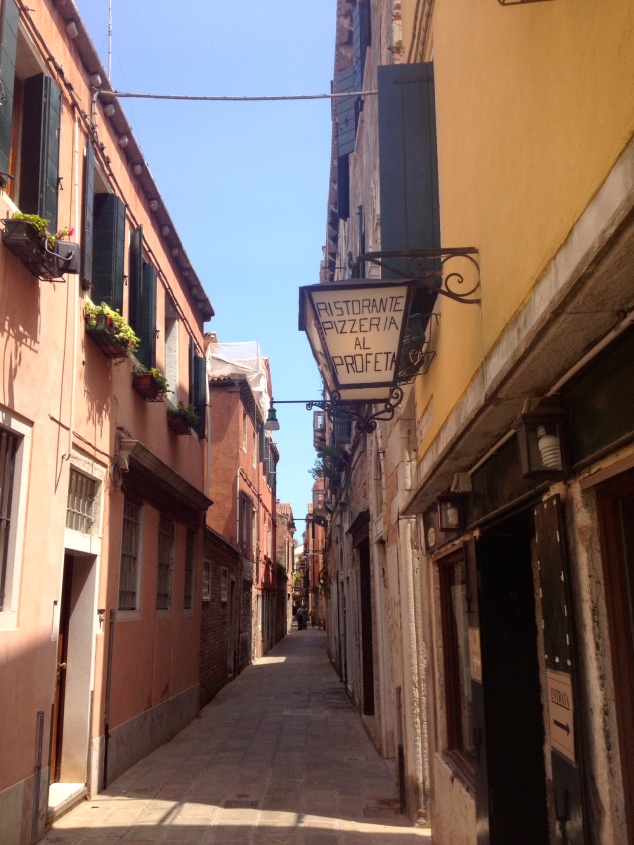 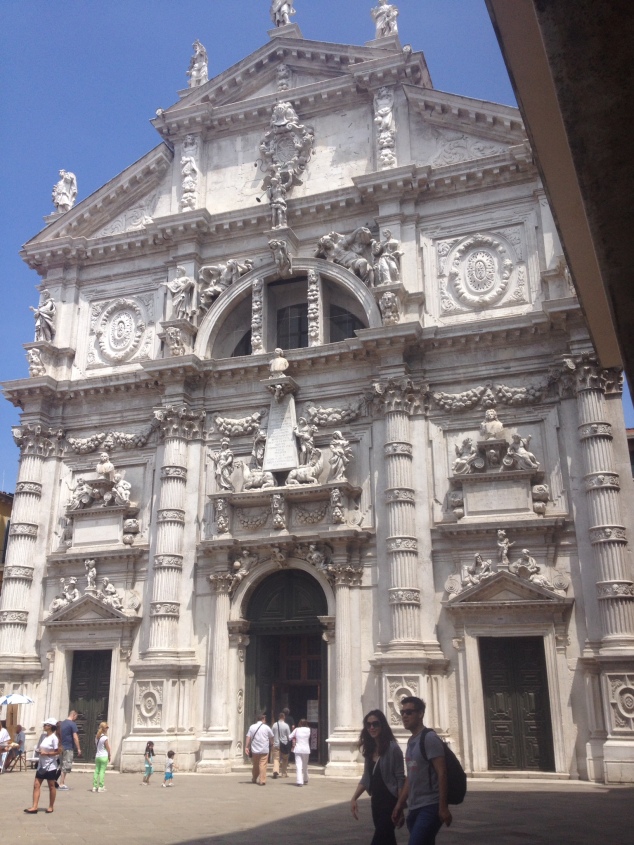 I took photos of the canals mainly, but the architecture and churches were also beutiful

Attack of the pigeons. 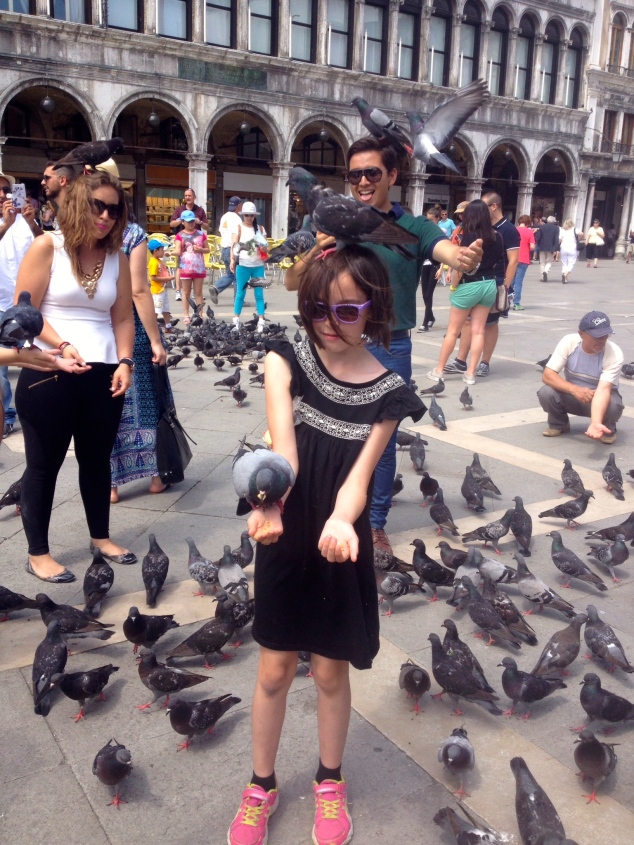 This little girl was braver than most of the adults, just sayin’

Looking out over to some islands 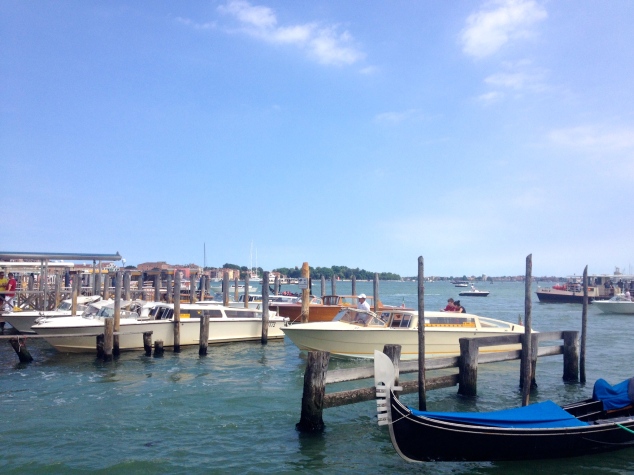 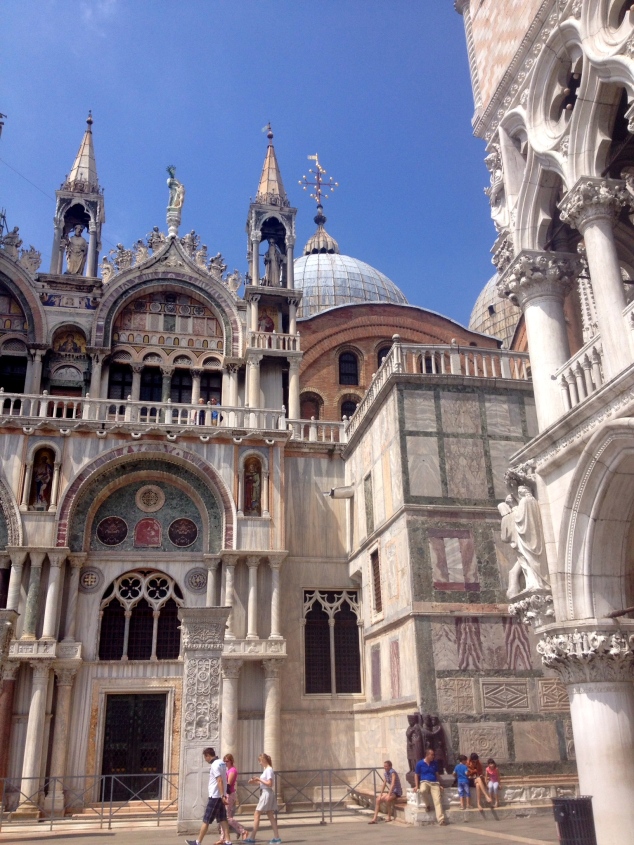 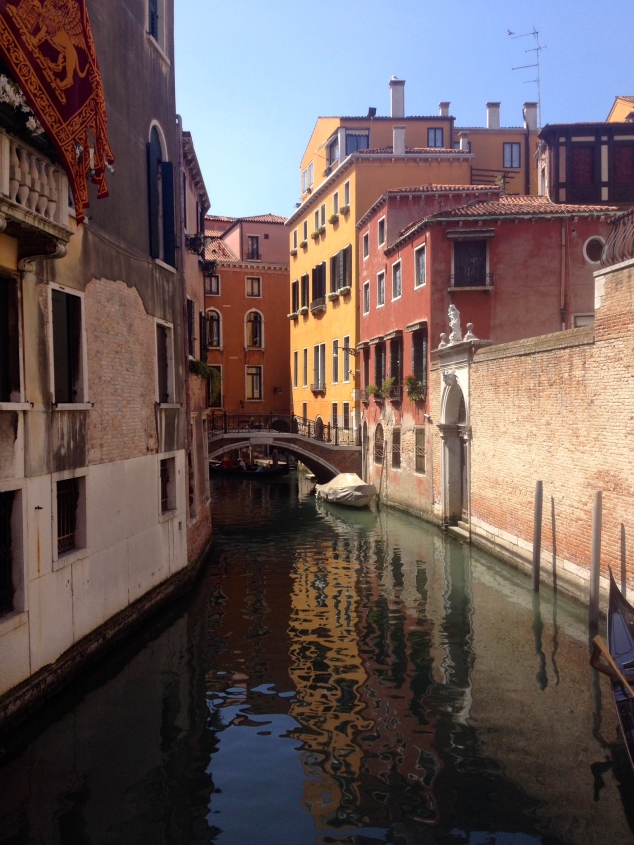 My kind of mask 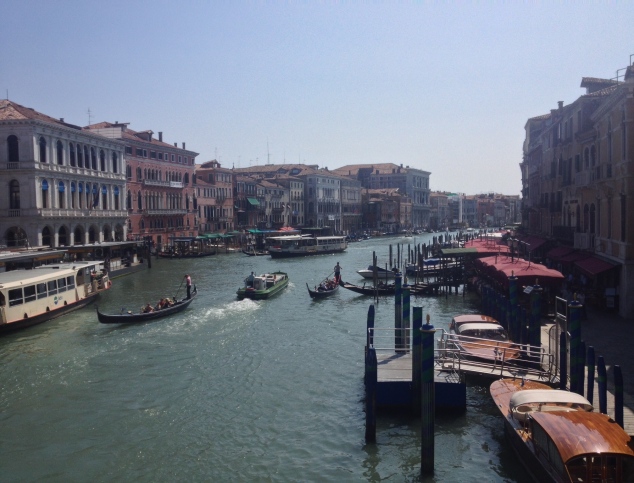 From the Rialto bridge

The Rialto Bridge, prettier to look at, a little too busy to try and walk over

A Spritz. Prosecco, soda water, some kind of italian liqueur and an olive? I wasn’t paying much attention, but everyone else had one. 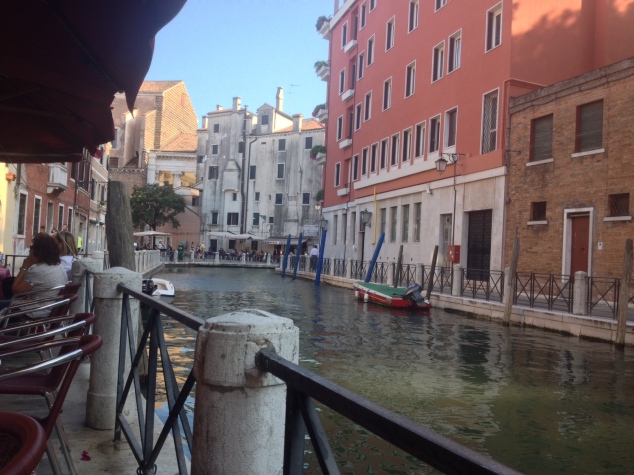 Saying good bye was hard, even though we were returning the next day.